Shauna Fleming founded A Million Thanks in 2004, when she was just 15 years old. The campaign began as a community service project in Orange County, California, with the goal of sending one million cards and letters of appreciation to U.S. military serving around the world.

The local project turned into a national cause just three weeks after its initial launch. Tens of thousands of letters poured in each week, written by individuals, churches, schools, business, and other organizations. Shauna was interviewed by various media outlets around the country to help spread the word about A Million Thanks. Within six months of starting, Shauna and her team of volunteers reached the initial goal of one million letters.

On behalf of grateful Americans around the country, Shauna presented the framed one-millionth letter to President George W. Bush in the Oval Office of the White House. Shauna continued to set subsequent goals, reaching each one and presenting milestone letters to high-ranking military officials, such as Chairman of the Joint Chiefs of Staff, Richard Myers.

To date, A Million Thanks has distributed more than seven million letters U.S. troops stationed around the world. The organization now has over 50 official letter drop-off locations nationwide to expand the efforts of the organization.

To commemorate the 10th anniversary of the organization, Shauna started two additional missions to the organization – granting wishes of military injured in the War on Terror and funding higher education scholarships to children of fallen military.

A Million Thanks has partnered with major companies and celebrities, such as General Motors, Shutterfly, Southwest Airlines, NASCAR, Gary Sinise, and Jessica Simpson, all in an effort to raise awareness for the organization. To share her story and the importance of helping others, Shauna speaks to groups around the nation on “The Power of One”. She also wrote a book, which was published by Doubleday, entitled A Million Thanks: My Campaign to Send One Million Letters to Our Troops.

Shauna is the spokesperson for A Million Thanks and National Military Appreciation Month and has done over 300 media interviews to promote the cause. From 2004 to 2005, Fleming hosted her own radio show on wsRadio.com, the largest Internet radio station in the country. She began doing the monthly radio show called, “A Million Thanks Radio”, making her the youngest radio talk show host in the country.

Fleming was the also teen spokesperson for the Department of Defense’s “America Supports You” campaign and the White House’s “USA Freedom Corps,” with the goal of inspiring young people to be actively involved in volunteerism. Her motivational abilities have lead to invitations to speak at meetings and news conferences at the Pentagon with Secretary of Defense Donald Rumsfeld, at President Bush’s Inaugural Youth Concert, and in front of 200,000 NASCAR fans at Talladega Super Speedway.
The goal of A Million Thanks is to provide support to service members and their families for as long as the United States has a military.

“Feeling gratitude and not expressing it is like wrapping a present and not giving it.”-William Arthur Ward 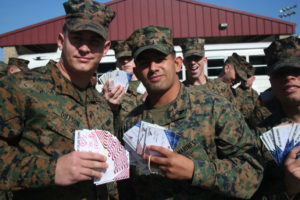 A Million Thanks provides support and appreciation to our active and veteran military men and women through sending letters and granting betterment of life wishes, as well as providing higher education scholarships to their children. 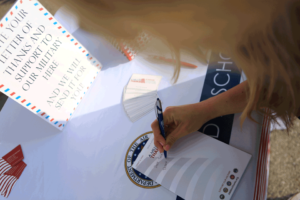 We collect and distribute millions of letters of thanks and support and send them directly to our active, reserve, and veteran military 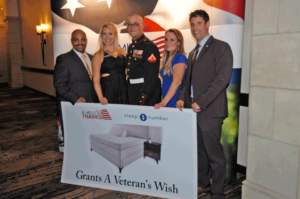 We grant wishes to our injured military veterans that make their lives more enjoyable. 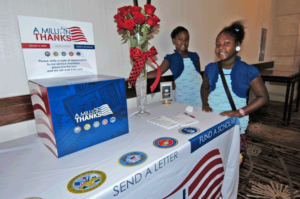 A Million Thanks, Inc. (AMT) is a nonprofit organization that is recognized by the IRS as exempt under Section 501(c)(3) of the Internal Revenue Code. Generally, donations to AMT are tax deductible to the fullest extent allowed by law.  All donations are received by AMT with the understanding that funds are subject to its full control and discretion.  AMT’s federal tax identification number is #26-0361789.