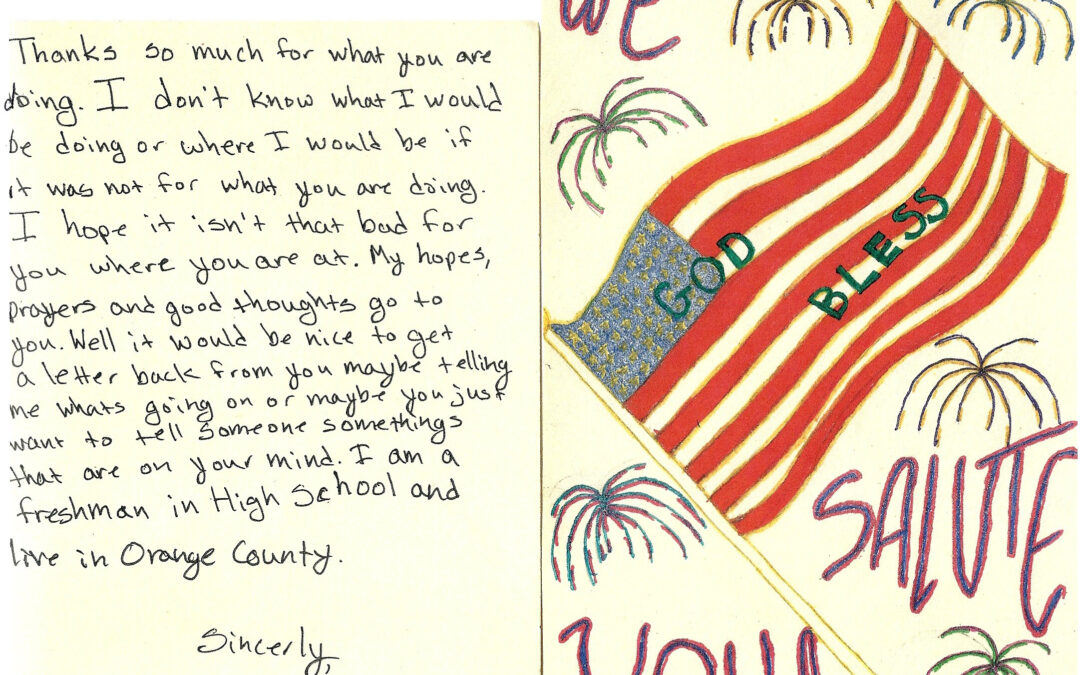 Thanks so much for what you are doing. I don’t know what I would be doing or where I would be if it was not for what you are doing. I hope it isn’t that bad for you where you are at. My hopes, prayers and good thoughts go to you. Well it would be nice to get a letter back from you maybe telling me what’s going on or maybe you just want to tell someone somethings that are on your mind. I am a freshman in High School and live in Orange County. 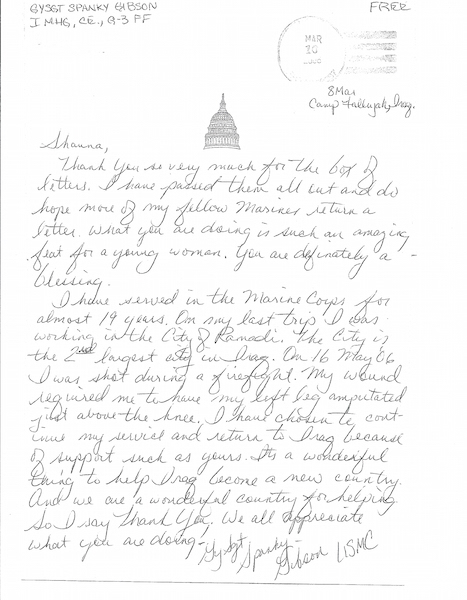 Thank you very much for the box of letters. I have passed them all out and do hope more of my fellow Marines return a letter. What you are doing is such an amazing feat for a young woman. You are definately [sic] a blessing.

I have served in the Marine Corps for almost 19 years. On my last trip I was working in the City of Ramadi. The City is the 2nd largest city in Iraq. On 15 May ’06 I was shot during a firefight. My wound required me to have my left leg amputated just above the knee. I have chosen to continue my service and return to Iraq because of support such as yours. Its a wonderful thing to help Iraq become a new country. And we are a wonderful country for helping. So I say Thank You. We all appreciate what you are doing. 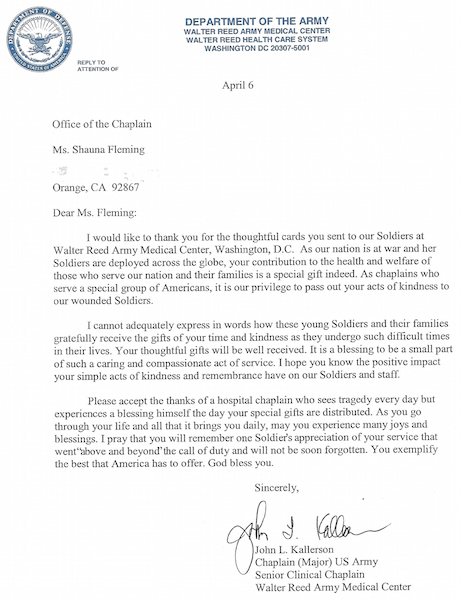 Letter From An Army Chaplain

I would like to thank you for the thoughtful cards you sent to our Soldiers at Walter Reed Army Medical Center, Washington, D.C. As our nation is at war and her Soldiers are deployed across the globe, your contribution to the health and welfare of those who serve our nation and their families is a special gift indeed. As chaplains who serve a special group of Americans, it is our privilege to pass out your acts of kindness to our wounded Soldiers.

I cannot adequately express in words how these young Soldiers and their families gratefully receive the gifts of your time and kindness as they undergo such difficult times in their lives. Your thoughtful gifts will be well received. It is a blessing to be a small part of such a caring and compassionate act of service. I hope you know the positive impact your simple acts of kindness and remembrance have on our Soldiers and staff.

Please accept the thanks of a hospital chaplain who sees tragedy every day but experiences a blessing himself the day your special gifts are distributed. As you go through your life and all that it brings you daily, may you experience many joys and blessings. I pray that you will remember one Soldier’s appreciation of your service that went “above and beyond” the call of duty and will not be soon forgotten. You exemplify the best that America has to offer. God bless you. 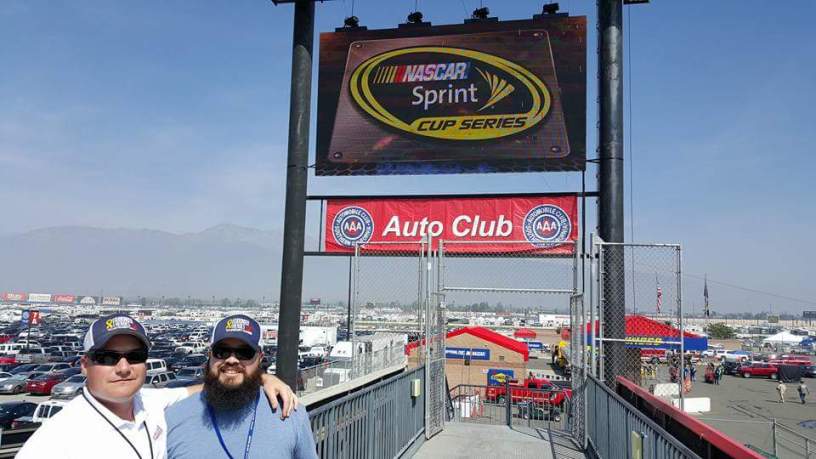 For 33-year-old veteran Casey Schaubslager, cars have always been his favorite. Growing up, he dreamt of one day stepping foot on the NASCAR track, maybe even getting behind the wheel of one of their speedy cars.

This dream flashed before his eyes as he read an email from A Million Thanks just a few years ago.

Huh? They want to do what? How did they even know I liked NASCAR?

For Casey, this was the first time he heard of A Million Thanks.

A Million Thanks reached out to Casey to grant him a wish – his very own NASCAR wish.

Casey was granted a pass to go to the NASCAR Sprint Cup Series Auto Club 400 in Fontana, CA.

“The experience was unreal. It was my first ever sporting event with NASCAR, and was a huge de-stresser,” Casey said. “What [A Million Thanks] did for me was more than just provide a ticket to watch. The staff was unbelievably accommodating and made a portion of my life less stress free and able to get away and have fun for a while.”

Casey was able to watch multiple races and got to hang out with some of the A Million Thanks crew. He said this small action of kindness impacted him in ways he cannot describe.

“It has made me realize how a simple gesture and appreciation event can be fulfilling for a veteran, and to see that someone cares,” Casey said.

Casey served in the United States Marine Corps from 2002 to 2006 as an infantryman.

After graduating from the University of Phoenix, Casey now works for a nonprofit organization in Bakersfield called The Wounded Heroes Fund  as their program and outreach coordinator. This organization aims to help veterans with the sometimes difficult transition from military service to civilian life.

He says there is no one specific avenue that the organization helps veterans. They offer grants, provide a service dog training program and an equine therapy program to name a few. A lot of the programs consist of financial, legal and marriage programs. They help direct veterans and their families to local veteran organizations that help with claims, benefits or other needs with the VA. Casey also helps plan fun events such as monthly hikes, fishing, date nights and movie nights.

He said experiencing the love and appreciation through the action of A Million Thanks inspired him to help other veterans.

For more information about The Wounded Heroes Fund, contact Casey at casey@thewoundedheroesfund.org.

The granting of this wish is made possible, in part, by U.S. Rigging (usrigging.com) & Pelican Rope (pelicanrope.com) 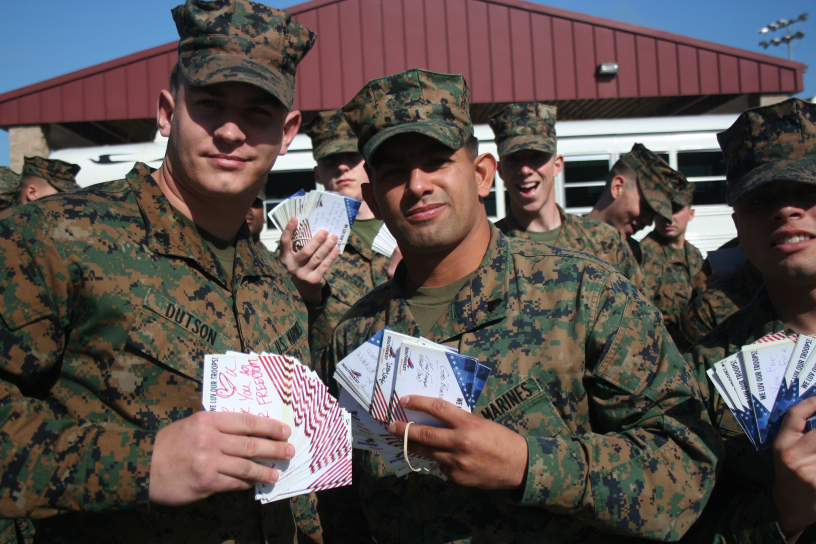 How To Write A Letter